The weatherman had threatened rain, but we decided to go anyway. We arrived at 8:45 (a little late due to I-35 highway construction). 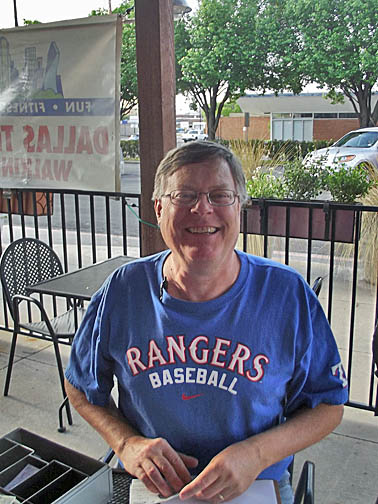 We got registered by Dave who was the walk registration volunteer. 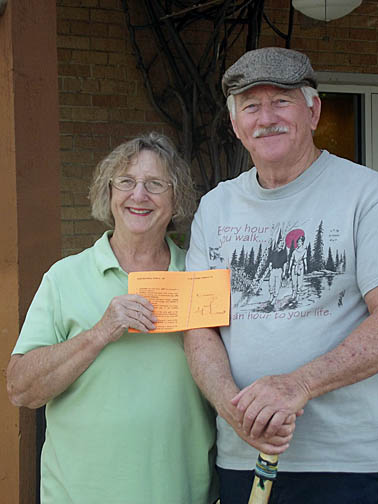 Helen, the Walk Director, with the directions for the walk.

Ed stopped to check out the Hermon Lee Ensign horse fountain.  It was donated by the National Humane Alliance and installed in 1911. 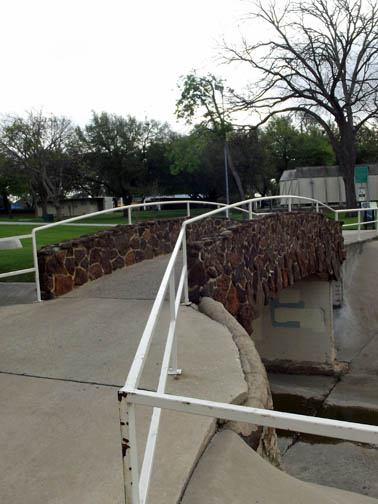 We detoured from the official walk route to cross this arched rock bridge to visit Quakertown Park.

We found this  stained-glass memorial to Pops Carter, a local blues legend. 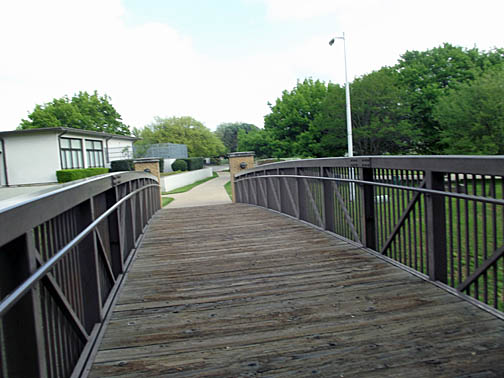 Back on the official walk route we crossed this bridge over a small creek.

Pretty purple iris along a stream of river rock. 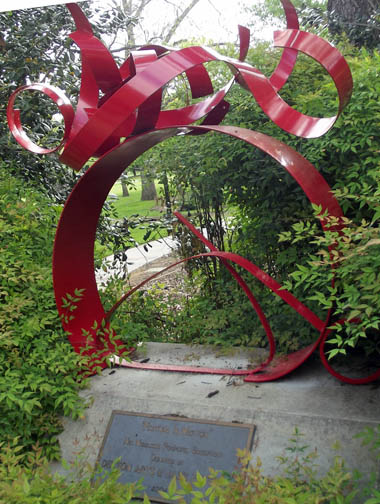 Festival In Motion, a.k.a. Woman Rolling Down a Hill, purchased by the Denton Festival Foundation for the City of Denton, May 2004. 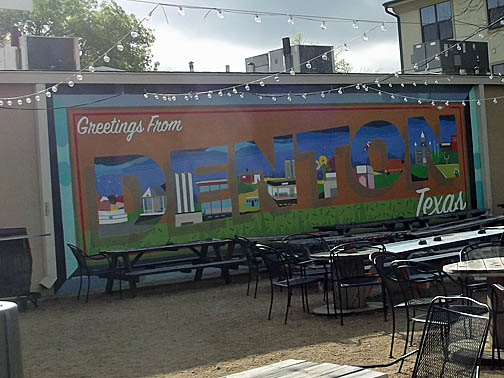 An empty/abandoned 2 story low-rise power generating plant building was converted for use as Central Fire Station. There is a fire fighting museum located here also.

Built in 1941 to serve as a warehouse and feed mill for what had become the Kimbell-Diamond Milling Company. 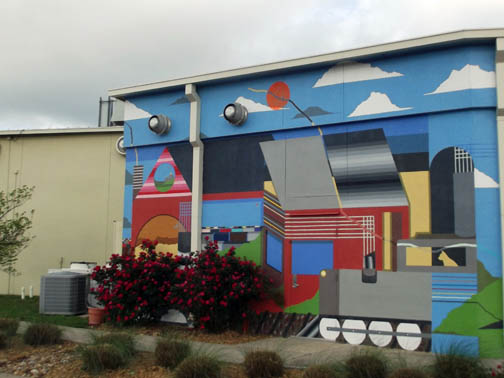 Abstract Train Mural on the same building by the same artist. I like the first one better. 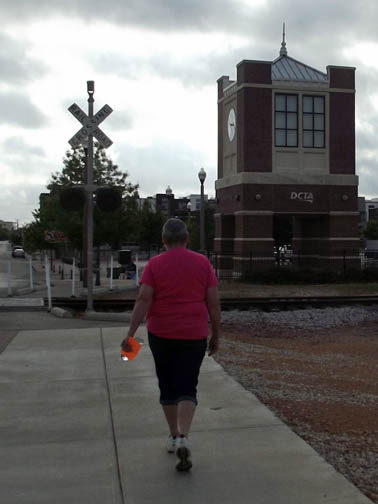 Carol headed toward the transit center. 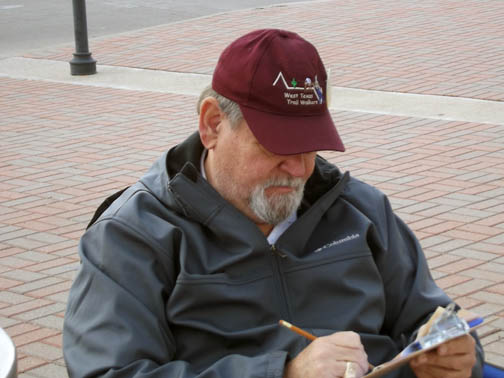 Bob was manning checkpoint #1 at the transit center.

Heart graffiti/mural on an empty building along the railroad tracks.

Retired bell from the old John B. Denton College, in the courtyard at the First United Methodist Church. 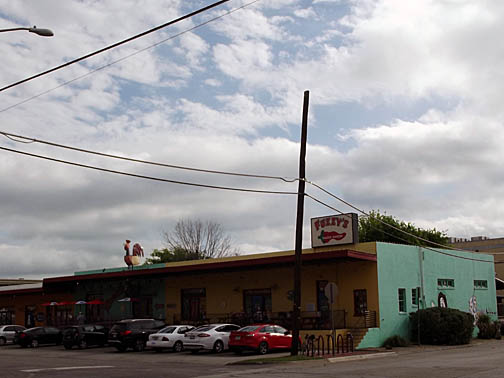 Fuzzy’s would have been a good place to eat, but it was too early. 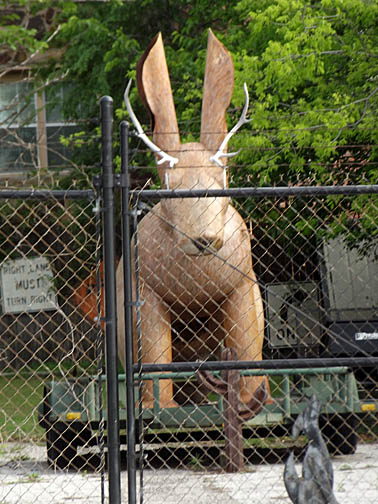 Jackalope sitting on a trailer.

The Wright Opera House opened in 1901 hosting popular operas and other shows of the era. It also doubled as a saloon until 1913.

Couldn’t get all of this mural as cars were parked in front of it. This one was done by art students of Denton High School. 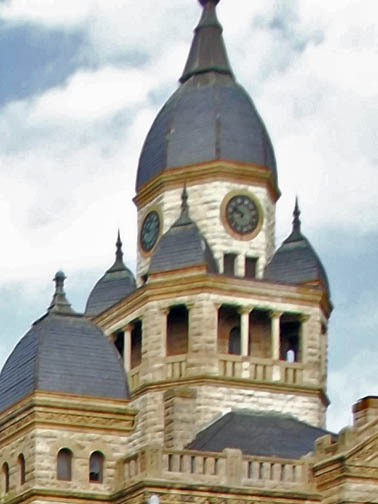 The central octagonal dome of the old courthouse has four clocks – but they aren’t working. 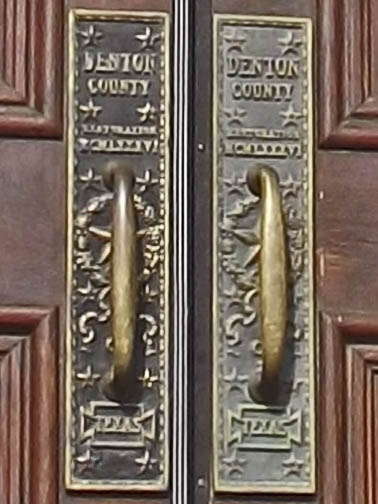 Ornate handles on the courthouse doors.

Out of place grave of Col. John B. Denton: pioneer lawyer, preacher, and soldier.  He’s buried on the courthouse lawn. 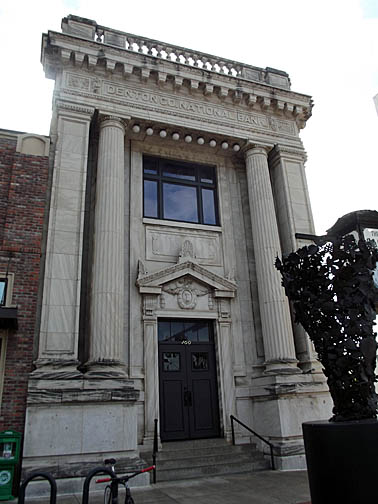 Old bank building from 1913 with a “Temple” design entrance. It has a marble veneer with huge columns. Above the entrance is some elaborate decorations.

Bronze Tornado of Leaves, Pine Cones, and Acorns by David C. Iles is on the corner in front of the former bank.

Confederate Soldiers Memorial on the lawn of the Denton County Courthouse.

Walkers ahead of us at Checkpoint #2 .

A new multi-war memorial stands proudly on the southwest corner of the old county courthouse. 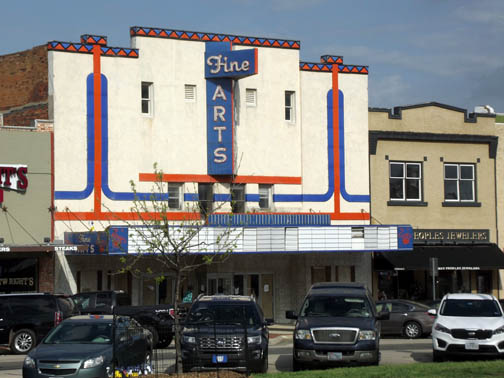 Art Deco building dates from 1890, with alterations made to it in 1925, and later in 1960. It was originally called the Texas Theater, but it was renamed to the Fine Arts Theater in 1957. 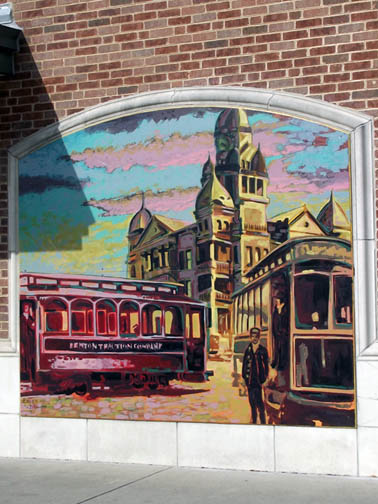 A watercolor of the 1896 Denton Courthouse by C. Reid. 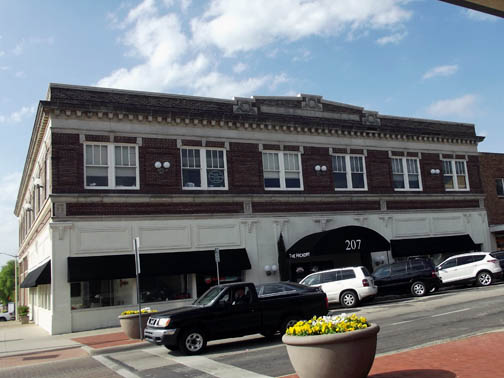 Built in 1915, this was the first building on the square to be constructed with a steel frame.

The Campus Theatre was built in 1949 by Interstate Theatres.  It was one of three cinemas owned by the company in Denton.  It closed its doors in 1985.

Purple Shamrock is mainly a houseplant, but we found this one blooming in an outdoor planter. 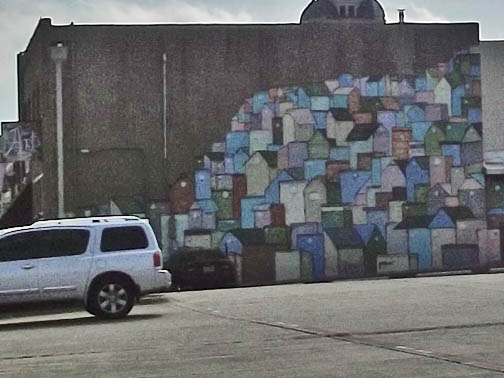 Another Mick Burson mural. This one is on the side of Creative Art Studio.

Built in 1882, the R.C. Scripture Building is home to Dix Coney Island.  Carol and Ed are waiting for me to finish taking pictures. 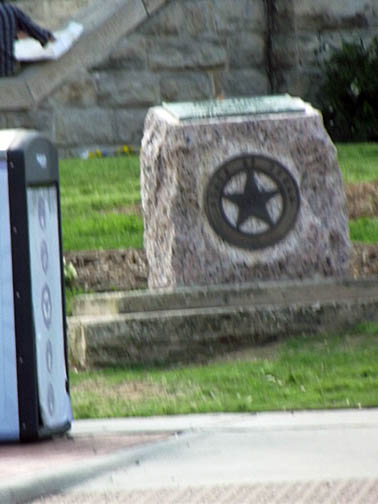 I strayed from the walk route to get this 1936 Texas Centennial County Marker. 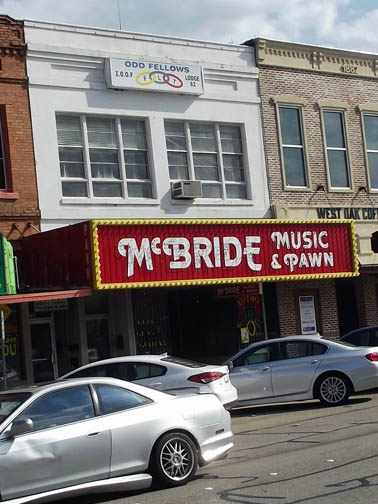 This is still home to IOOF Lodge #82. 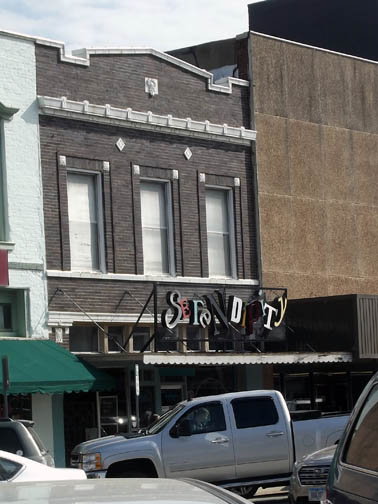 Built in 1890, it is part of the County Courthouse Square Historic District .

Back on the walk route with Carol and Ed we pass the old city hall.  It was built in 1927.  It was designed by the prominent Fort Worth architectural firm Van Slyke and Woodruff in the Spanish Renaissance style. It now sits empty.

A summer mural painting class at the University of North Texas College of Visual Arts and Design painted this mural in 2016.

Passed this fountain near the entrance to Cupboard Natural Foods, and the walk is done.